Oldbies remember the times when terminals used to connect to powerful servers and the information was processed by mainframes, a thin client being essentially an input device to display data.

Gradually PCs were becoming smaller and more powerful, and it became possible to process information at work places. Thanks to traditional modern applications.

A huge Soviet supercomputer working at clock rate of 10 MHz – fastest in the 60’s. Now one of our offices is located in a room where such machine used to stay. Image courtesy of Novosibirsk Institute of Theoretical and Applied Mechanics.

It is traditional application that we access information through, are entertained by and get new potential for our work. Basically, they are the frameworks of our interaction with the PC. Any problems we might face while working with the computer arise from the way the applications were developed long time ago.

Traditional applications have been serving us faithfully for ages, but they are not absolutely devoid of drawbacks. They are tied to a certain machine and your operating and file system. They need installation, which requires special skills and takes time. Moreover, almost all the results of your work with applications are stored locally on the PC, and collective work with them runs into certain difficulties.

Thus, we have to think over main processes inside the applications. Except doing your work, you have to know something about file types, codecs, drivers and many more things having nothing to do with the task you are solving. Being an expert in your field is not enough any longer, you have to be an expert in computers as well. 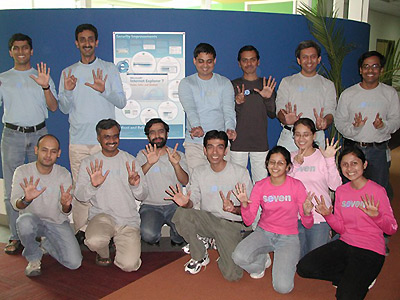 Microsoft and Indian software companies are famous for developing software. This picture shows Indian developers at Microsoft. Courtesy of blogs.msdn.com/ie

The Internet changed an average person’s capabilities dramatically. Now we can easily find and use vast digital experience stored in the net. With standards for browsers developing, users can expect any content to be available for use any time and any place.

I realized the possibility of replacing traditional applications by web ones when I saw my friend using Gmail web interface instead of his mail client. He was not an expert in computers and I offered him my help in installing and tuning Thunderbird. My friend thanked me but politely declined the offer as the interface perfectly satisfied all his needs.

Web applications are a nice discovery, but they do not lack some problems, either.

Quite often we use the Internet as a source of information. It can as well be used as an effective tool for entertainment and improvement of our work facilities. 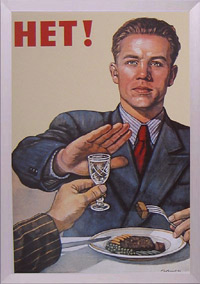 Just like this person in a Soviet poster says “Net” to alcohol, certain Internet users say “no” to desktop software and choose web-based applications.

Traditional web applications are built up on some well-known standard elements of interface. Hyperlinks, combo-boxes and forms are excellent for creating interactive pages, but unfortunately are not enough for editing images, showing video flow, displaying GPS data or making a phone call. Users are requiring more and more of the interface and make designers and developers provide new ways of interaction with different data and processes.

Rich Internet Applications are notable for providing you with a possibility to do your work in the Internet. The set of tools I need for my work is to be available for me everywhere regardless of the PC type or the OS version. The same refers to my data. All of my working environment is supposed to follow me like a cloud, RIA inherited this idea from traditional web applications and went further.

Unfortunately, we couldn’t find any image of a cloud of rich internet applications following their users wherever they go.

Multipurpose RIAs are a new generation of applications evolving as a result of web application and traditional desktop application symbiosis.

When the applications and the data related to them are really “on a cloud”, we get radically new capabilities. It becomes much easier to share data or work in collaboration. Such collaboration can proceed either on- or off-line, with the use of audio or video flow and text to supplement the communication. 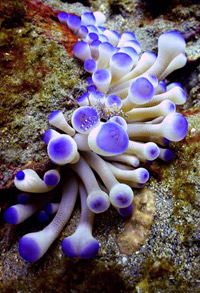 True RIAs make absolutely unnecessary an abstract concept of a file. Your data is saved and you can search it through. However, you never deal with “raw” files, you work with your “ideas” instead. Such work is much more effective as it focuses on the result and does not require a user to know something about computer processes.

The coral animal lives in symbiosis with small algae and other organisms – just like RIA with desktop applications! Courtesy of coral-reefs.org.