Charles has safely arrived back to New York and shared his Sheregesh experiences with us.

After a 10 hour commute, at 6am, we got to the apartment which was a two bedroom. There were 7 of us… The guys from Sibers graciously gave me the smaller bedroom (Serge, wife and son Egor got the master bedroom) while the 3 other guys took the sofa and floor. I generally don’t like any special treatment, but in this case, I happily took it. 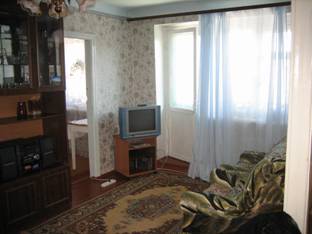 Alex toasted a couple of vodka shots to our health. The other guys went skiing at 9am. I went in round two with Serge’s wife and son at noon. I needed the rest. 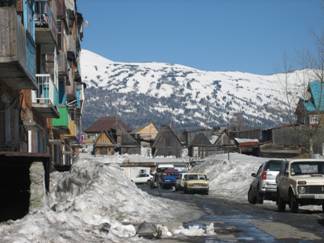 View from the front of our apartment in Sheregesh

Once we got to the slopes, I rented skis and clothes from a ski shop. In the US, it’s easy to rent skis, but I’ve never heard of renting a jacket and gloves. As it turns out, I was not the first American to rent skis. “Yes, they had an American two years ago,” Alexey translated from the ski shop proprietor. “And last year, someone from New Zealand came,” he continued to boast. Even though he was very nice, when I returned the skis and equipment, I was charged $30 while Andrey who rented the same things and for longer was charged about $20. I think maybe there’s just an American tax on some products. 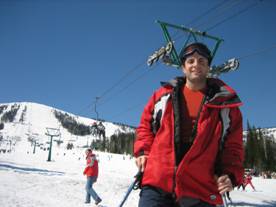 I’m all decked out

I started to think that for some of the people there, I was the first live American they had ever seen although I never confirmed this with anyone.

We hit the slopes where I was surprised to see that there were multiple companies controlling the lifts. If you bought lift tickets from one company you could only use it on their lifts, not the others. Also, about half the lifts were chair lifts and the other half were pulleys. I’ve seen pulleys on the bunny slopes in the US but these were like 10 minute rides with the pulleys

The snow was slushy since it was warming up fast but it was good enough to have fun in. I was absolutely terrified of injury so I took it very easy. The song “Relax, take it easy” by Mika played everywhere in town so it was simple to remember to be calm.

There’s really only one trail on the mountain, but it provided enough variety for me.

We stopped skiing at various points to order drinks. The drink of choice was a shot that was half vodka and half mustag. When it was my turn to buy a round I ordered pyat (five) vodkas. But the order taker didn’t understand, so I repeated myself. Finally, the women in line behind me offered her help since she apparently spoke English. I asked her to order me five vodka shots. She says, “What’s vodka?” I was completely mystified. “Vodka” I repeat. Still, “What’s vodka?” Finally I realize my mistake, “Vohdka” I say elongating the long “o” in the word, and the woman says, “Ahh, vohdka”. I’m still amazed that “vodka” is a word that can’t be recognized as “vohdka”, especially at a bar!